Quotes from the Interview
“I’m currently working on IFAA: the International Fulldome Arts Alliance. Last year at the IX Symposium 2014 in Montreal, a bunch of us got together since we had been thinking about this for a long time. The whole idea of expanding the arts in fulldome and how do we do that. How do we get existing venues and people who have portable domes to get on board with this idea that there needs to be alternative content. So we decided that we would start the IFAA and our mission is to create an open alliance where fulldome venues and artists can come together and start interacting and planning.”

“As a video artist, I’ve always been interested in getting to the emotional experience of the viewer. Trying to help the viewer grasp something that maybe they don’t understand or challenging their views on something. I find that hitting the emotional part of the viewer is the easiest way to do that. And once you add immersive and interactive, it just takes it so much further than you could ever hope for. I’m always trying to express it in a feeling, idea, or concept.”

“The challenge that comes in for me is that we had five artists during the Morphos fulldome artist in residence program and they all have different mediums that they each focus on. And thats what I love; the need to focus on the artist staying within their own skill set. So some of them were doing live action shots or computer renders. One artist had shot fisheye photography of dolphins prior to the residency. So there was a lot of different content that we were working with. We did a weeks worth of workshops and then the artists just have to pound out the work and we provide them with support. And for this upcoming program we are adding a production assistant, so they have help in getting their work ready for a dome preview.” 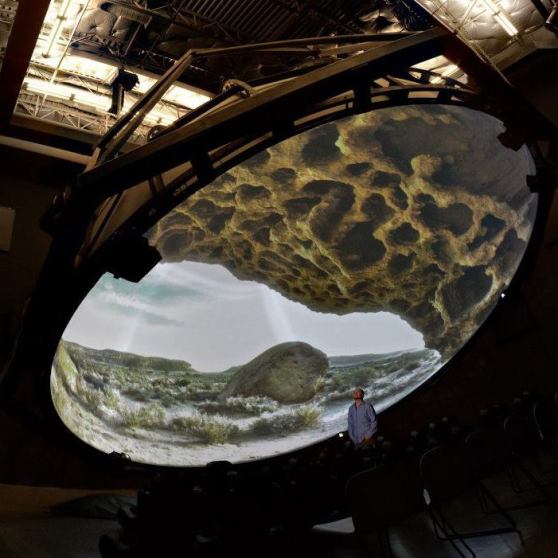 Bio
Ethan Bach is the CEO of BETA – Emerging Technology Arts, which specializes in immersive and interactive digital environments, especially fulldome. He received an MFA in Electronic Arts from Rensselaer Polytechnic Institute in 2008 and BA in Media Production from The Evergreen State College in 1996. His expertise in immersive video art and project management builds from almost 20 years of experience.

Bach served as Principal Investigator for a Department of Defense (DOD) grant developing interactivity for fulldome and a research associate for a National Science Foundation grant developing tools and content for fulldome environments in his former position as the Digital Dome Manager at the Institute of American Indian Arts (IAIA). In just two and a half years he developed five dome courses, an artist in residence program, curated several art shows and created vDome with Charles Veasey. vDome is the world’s first software for the digital dome that runs off a single computer and allows for easy plug and play, VJing, interactive art, and gaming. vDome is currently in open source release. (Source for the bio text)

One thought on “The Dome Dialogues – Ethan Bach”